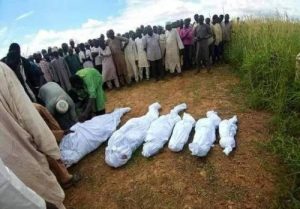 Tragedy has greeted a family of six in Yaldu, a community in Arewa Local Government Area of Kebbi state after all members of the family died on the same day.

It was reported that the family comprising of a man, his wife, and their four children lost their lives in their apartment after the building crashed on them following a heavy downpour in the town.

Naija News learnt that the structure collapsed after days of heavy downpour in the area. However, no statement has been received from any of their relatives or authorities in the state at the time this report was published.

Their remains, however, has been reportedly buried according to Islamic injunctions, Naija News understands.

In another news, Naija News reported that a Kenya lady, Dorcas Jepkemoi Chumba has been swept away in a raging dam while taking photos with her lover whose name is revealed as Benjamin Kazungu.