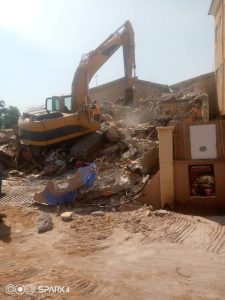 Kaduna government has demolished Asher Hotel, the alleged proposed venue for the sexy party which stirred a barrage of reactions earlier on social media.

Naija News reported earlier that Governor Nasir-El-Rufai of Kaduna State has commended the state Police Command for arresting the organisers of the maiden edition of a Sex Party in the state.

The development was disclosed in Kaduna on Wednesday, December 31 by the Special Assistant to the governor on Media, Abdullah Yunus.

Yunus stated that the condemnable event which was scheduled for December 27, 2020, at an undisclosed venue in the state capital had been cancelled and the culprits would be prosecuted.

Subsequent report reaching Naija News at this time confirmed that the alleged proposed venue for the sex party has been demolished by the state authority.

According to Kaduna State Urban Planning and Development Authority, KASUPDA, in a tweet on its official Twitter handle on Thursday, Asher Hotel which is located in Barnawa Kaduna South is the proposed venue for the Kaduna Sex Party, adding that the hotel was also caught contravening the Covid-19 guidelines of the state.

KASUPDA added that it will not hesitate to demolish properties used for such immoral act.