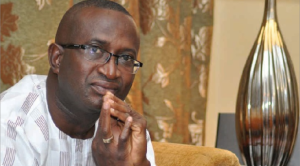 Mrs. Ndoma-Egba died in the road accident which occurred on Friday morning along the Benin-Akure expressway.

It is understood that she was travelling to Akure where she was billed to attend a function before the accident in which she lost her life occurred.

While further reports on her death remain sketchy, the Senator broke down in tears before the line went off when Vanguard attempted to make further inquiries on the development.

Meanwhile, Naija News reports that his house located in Calabar, the Cross River State capital was vandalized during the #EndSARS protest which took place in October.