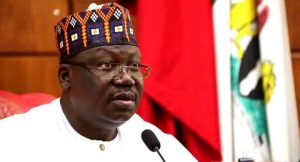 President of the Senate, Ahmad Lawan has paid a visit to former Governor of Kano State, Senator Rabi’u Kwankwaso, to offer his condolences over the death of his father, Alhaji Musa Sale Kwankwaso.

Recall that Musa Kwanwaso had died in the early hours of Friday and was buried the same day in accordance with Islamic rights.

The senate president alongside those who accompanied prayed with Senator Kwankwaso at his Kano home at Miller Road, Bompai and also at the graveside of his father.

Speaking to newsmen, Lawan said: “This loss is for all of us. Religiously and traditionally, there is no division or dichotomy among us. This is what we should do to condole with anybody who is bereaved. Likewise, if something good happens, it’s also for us to rejoice and congratulate one another. This is the way we should treat each other. This is what is expected of us.

“We that he left behind, may we also leave a good legacy behind when our time is over. May God grant you the fortitude to bear the loss. May God console all of us for this great loss of our father.”

The late Kwankwaso was a village head before he was elevated to district head of Madobi Local Government Area and Majidadin Kano by the late Emir of Kano, Ado Bayero.

He was recently appointed Makaman Karaye by the Emir of Karaye, Ibrahim Abubakar ll, one of the emirs of four emirates created by Governor Abdullahi Ganduje.