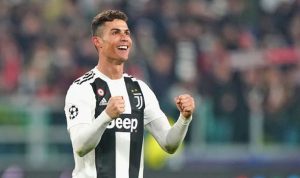 Portuguese international, Cristiano Ronaldo has crushed any immediate plans to leave the Italian club, Juventus after he declared on Thursday that his ambition remains high as ever.

Ronaldo made a sensational move to Juventus from Real Madrid in 2018 and has won the Italian scudetto in his two seasons at the club.

However, the club and player have not enjoyed similar successes in the UEFA Champions League, crashing out in the last 16 stage of this year’s competition to French club, Lyon.

The Juventus striker has however recommitted to the club and has disclosed that his “spirit and ambition were as high as ever,” adding that he intends to “break records and conquer the world” next season.

“As I’m getting ready for my third season as a ‘Bianconero’, my spirit and ambition are as high as ever,” the 35-year-old wrote on Instagram.

“With all my strength and with the precious help from my teammates and all of the Juventus staff, we work once again to conquer Italy, Europe, and the World! Breaking records.”

“Overcoming obstacles,” “Winning titles and achieving personal goals. To do more and better once and again.

“To reach higher and to succeed in all challenges that may come our way.”

“We are Juventus! We are the Champions! We are back and stronger than ever! We are counting on you! All together! Fino Alla Fine!”

Despite his age, Ronaldo still remains one of the finest footballers that are still playing the round-leather game and the star player will be hoping for better results in the new season.