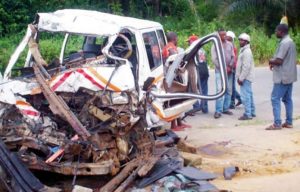 Naija News reports that the fatal accident was caused by a truck that lost control and rammed into some vehicles by the roadside.

The accident that occurred on Sunday night also left many people with various injuries.

Those who sustained injuries were rushed to the hospital for treatment.

It was gathered that the dead passengers were initially trapped inside the vehicles.