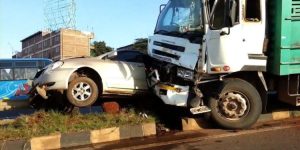 No fewer than seventy people reportedly escaped death with a series of injury in a road accident which claimed thirteen lives in Katsina State yesterday.

According to the report conformed to newsmen on Friday morning, the terrible accident happened along Kaita/Dankama Highway of Katsina on Thursday night, January 21, 2021.

Naija News learnt that the truck was conveying majorly passengers from the neighbouring Niger Republic to a destination. It was further revealed that about seventy animals died in the accident.

A subsequent report revealed that those who sustained degrees of injuries in the accident have been taken to the Federal Medical Centre, Katsina General hospital and Amadi Rimi Orthopaedic Hospital, all in Katsina, for proper medical attention.

The remains of the victims were buried on Thursday night at Dankatum graveyard with delegations of the Katsina State Government in attendance, Naija News understands.

The delegation reportedly includes the Commissioners of Local Governments, Alhaji Ya’u -Umar Gwajo-Gwajo and that of Sports and Social Development, Alhaji Sani Danlami, as well as Governor Aminu Masari’s Senior Special Assistant on Restoration Alhaji Sabo Musa and Head of Kaita Local Government Administration among others.

However, the state Police Command spokesman, SP Gambo Isah, is yet to release any official statement or react to the incident as at the time this report was given.

Meanwhile, in what appears to be a national embarrassment, a police constable and a serving Nigeria army personnel have been nabbed for their involvement in a robbery operation in Ondo State, Naija News reports.