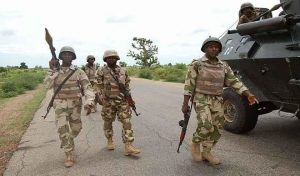 The Boko Haram ambush that resulted in the death of Col Dahiru Bako also claimed the lives of three other soldiers who died with their commander.

The fresh detail was unveiled during the burial event of Col Bako which held on Tuesday at the Maimalari military cemetery in Maiduguri, Borno State.

As earlier reported by Naija News, Bako who until his death was the Commander of the 25 Task Force Brigade, Operation Lafiya Dole died in the hospital where he was receiving treatment for injuries sustained from the Boko Haram ambush attack.

After the news of Bako’s death hit the newsstands, the spokesman of the Nigeria Army’s Operation Lafiya Dole, Ado Isa, confirmed the death, saying that the colonel died in a military hospital where he was receiving treatment after the ambush.

However, the Army statement was silent about the death of three other soldiers killed in the ambush alongside their commander.

But a report monitored by Naija News on Humangle has it that the 25 Task Force Brigade also lost three soldiers as a result of the attack from the insurgents.

It was gathered that the nondescript caskets bearing the remains of these soldiers who paid the supreme sacrifice in the service of their fatherland were hidden from the view of dignitaries including the Chief of Army Staff, Lt. Gen Tukur Buratai, and the Borno State Governor, Prof. Babagana Zulum who were present during Bako’s burial.

Their casket was not draped in the national flag, they didn’t get any official mention from the Army, neither were their families offered any official condolences at the burial event.

The development, according to sources close to the troops is understood to have caused some dissatisfaction among the soldiers but who couldn’t express their views due to their rules of engagement.

It was however learnt that the Borno State Governor reportedly donated 2 million Naira each to the families of the three deceased soldiers after he learnt of the incident.

Meanwhile, President Muhammadu Buhari has acknowledged to the international community that Nigeria is yet to fully win the war against Boko Haram and other insurgents.

The President said this on Tuesday during his pre-recorded address to the United Nations General Assembly (UNGA).

He, therefore, called for support from the International community in ensuring all forms of banditry and insurgency are overcome.

Specifically, he urged the leaders to take decisive action against the illicit flow of small arms and light weapons.