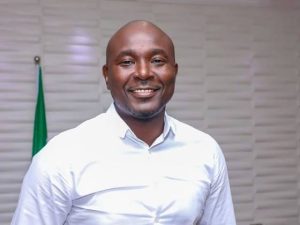 Akin Alabi,  House of Representatives members has embarked on a mission to repeal the law making the wearing of military camouflage by Nigerians illegal.

According to him, the law is archaic, stating that Nigeria is among few countries where it is illegal to wear the military camouflage, mentioning Jamaica, Trinidad and Tobago and Antigua, amongst others.

Alabi further stated that a lot of young Nigerians have sent him messages lamenting the rate at which they get beaten for wearing military uniforms.

He said the soldiers are seeking such opportunities to ride on Nigerians.

This the Rep member made known in a series of tweets

Nigeria is one of the countries where it is illegal to wear a military camouflage. Some other countries are Jamaica, Trinidad & Tobago, Antigua and others

How does this make sense?#THREAD

I get a lot of messages from young Nigerians complaining about being harassed by soldiers because they wore military camouflage. While I don’t agree it makes sense, it is clearly stated in our laws that it is illegal to wear a camouflage or any clothings worn by the military.

There are two exceptions. You can wear it if you have the approval from a governor of the president. The other option is if you wear it during an entertainment performance, like in a Nollywood movie or a music video. The penalty for this is 1 month imprisonment or a fine of N10.

So the law is clear. Do not wear a camouflage. But does the law make sense? I’m sure some people will argue it does. Many will say it doesn’t. I’m one of those that say it doesn’t and I thought it would make a lot of sense to repeal that law.

I decided to put together a bill so we can repeal this law but I gathered that a distinguished Senator has already submitted a similar bill. I will be waiting for it’s progress. If nothing happens in a few months, I will push mine. For now, I wait.