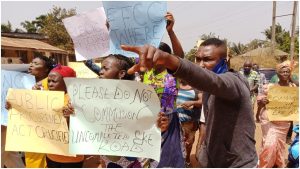 Residents of Eke community, in Udi Local Government Area of Enugu State on Thursday, February 4 took to the streets to protest against the commissioning of an unfinished project by the government.

Naija News understands that the protest started after a Federal Government delegation arrived the community to commission the project which is estimated to be over N400m.

Members of the community, however, in their large numbers with placards stood their ground that the road project should not be commissioned until it is completed.

The ecological fund road project is said to be under the office of the Secretary to the Federal Government. Naija News gathered that the project covers Enugu-Eke-Ogui Uno-Eke Eke-Obodo Amankwo-Oma Eke road.

They described the development as a monumental fraud which would be resisted.

However, the government is yet to make any statement regarding the development at the time this report is given.

In another news, a yet to be identified young man jumped off from a building and died while evading arrest by officials of the Economic and Financial Crimes Commission, EFCC on Thursday morning, at 1004 Estate in Lagos.

Naija News reports that the Nigeria anti-graft agency in their bid to arrest some suspected fraudsters, stormed the area this morning knocking from one apartment to the other and if denied access, would break into the apartment.