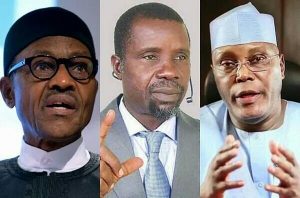 While predicting that Nigerians will be faced with more hardship, the cleric revealed that if Osagie Ize-Iyamu prays harder he will oust Godwin Obaseki as Governor of Edo State.

He said Atiku will become more popular in the run up to the 2023 presidential elections and that Uche Secondus is not the man to lead the PDP to victory.

Prophet Olagunju also warned Bola Ahmed Tinubu to stay clear of contesting for the presidency as it would be a waste of time and resources.

Below are the prophecies of Prophet Olagunju for 2021:

“God’s judgment will begin to visit them as from this year and surely many of them will neither witness nor participate in 2023 general election.

“Notable politicians will die mysteriously as a result of their sins against God and mankind. General Buhari, the President of Federal Republic of Nigeria is terminally sick as revealed to me by the heavenly God. Nigerians should not believe that Buhari is not sick. He is just managing his health that is why things are not moving on well in the country. His government cannot function (more) than that.

“As revealed to me by the Almighty God. APC will do everything possible to remain in power in 2023. APC government headed by Buhari is deep in corruption. The issue of Tinubu becoming Nigerian president come 2023 is a waste of money and time, as revealed to me by God Almighty. Even if they rig the election for him, just like they did for Buhari, there will be chaos all over Nigeria and the Nigerian Armed Forces will overthrow his government. It is not in the mindset of God for him to rule Nigeria.

“Should Ize Iyamu pray very well he would laugh at the end of the day.

“Before 2023 presidential election dissidents in the PDP will fragment the party, causing misunderstanding because of inordinate ambition and selfishness and it will affect the party and Atiku.

“God Almighty is very angry with Nigerians as well as the entire people of the world because of their gross sin against God Almighty. He, the Almighty, will continue to wrath His anger on the people of the earth through sickness, sudden death and hardship.

“The government of Buhari will inflict hardship on the people of Nigeria. What we are experiencing now is a child’s play because the economy is seriously rotten and bastardized. Nigeria should prepare their mind for any eventuality.”

“Those principalities controlling and manipulating Nigeria, their days are numbered.

“The Eastern security Network of IPOB will face serious problem from Buhari’s army.”

“Eyitayo Jegede, the governorship candidate of PDP in Ondo state will not win his case. Going to court with Akeredolu is waste of money and precious time.”

“The cabal of our nation, who are now planning to bring ex-President Jonathan to contest 2023 presidential election. Jonathan and this cabal are day dreaming. As revealed to me by the Almighty God, APC should prepare for war in 2023 general election as the PDP is ready to do everything to wrest power from APC. To those who think PDP can’t rule Nigeria again, they are dreaming a dream. What happened to PDP (God’s judgment) will also happen to APC. For APC is worse and corrupt (than PDP).

“Saraki and Dino Melaye are on their ways to limelight again. Before the year 2040 runs out the name “Nigeria” will enter the book of history as the nation called Nigeria will break into five nations and there will be nothing called Nigeria again.

“Already the flag and map of Nigeria have been torn into five in heaven, signifying five nations. That is, five countries under the hands of God. Certainly, Nigeria will break up. Thus says the Lord; and no miracle will change the breakup.”

“As revealed to me by the Almighty God, who knows the end from the beginning, there is a Plan B group of people in PDP and APC on how to push Atiku aside and root for Tambuwal and Wike as presidential and vice presidential candidates.

“If PDP thinks that the present leadership of Secondus will lead them to victory in 2023 general election, as revealed to me by the Almighty God, it means that they are dreaming a dream. In the eyes of Almighty God the leadership at national level is sinking in corruption and favouritism. Should PDP fail to remove them now, PDP will lose many strong members to the ruling party.”

“If Nigerian people fail to pray now, there will be more problem before and after 2023 elections. Nigeria should prepare for more hardship and increase in the petroleum price. The year 2021, the year of divine visitation on the wicked leaders; a year they will receive their rewards, as revealed to me by God.”

“…the name Atiku will be more pronounced and more popular. But those whom Atiku trusts will betray him. “If Buhari fails to pray very well, 2021 will be his last year in office. For him to complete his second tenure in office, it will take miracle of the century.

“Soonest the rift and misunderstanding that have been rearing its ugly head around all the Nigeria leaders and associations causing disunity will soon be settled. After this, a new generation of leaders will emerge and reposition everything and the Yoruba race will bounce back with unity and love as revealed to me by God Almighty.

“God of heaven spoke to me in an audible voice, saying there can never be peace in Nigeria for the people have forsaken Him. As long as the leaders and people refuse to acknowledge the sin of shedding innocent blood on daily basis.”

“From Tafawa Balewa, Biafra war, Festac 77, killing of innocent people have become normal thing. Thus says the Lord: The land is full of blood and guilty before God.

“Ladoja, the ex-governor of Oyo State should pray against sudden sickness. “If PDP in Oyo State thinks that APC is dead as revealed to me by God, that is a mistake on their part, a mistake of the century, for APC in Oyo State will bounce back and become formidable. “Also, as revealed to me by God of Abraham, for Seyi Makinde to win the second term as governor of Oyo State will take the grace of God and miracle of the century for opposition against him and his government will be stronger.

“Furthermore, Seyi makinde will find himself in the midst of controversy, blackmailing, he will also be at loggerheads with notable politicians in the state, including opposition leaders condemning his style of administration, accusing him of gross mismanagement and corruption using every available chance at their disposal to rubbish him and his government. So Seyi Makinde needs to be careful. “As revealed to me by God Almighty, Senator Teslim Folarin is a candidate to reckon with in the 2023 governorship election in Oyo State.

“If APC-led Federal Government rigs 2023 general election, I boldly reveal that it will mark the beginning of the end of Nigerian nation.

“The 2021 governorship election in Osun State, as revealed, is like that of David and Goliath of the Bible. While APC is the David and PDP is the Goliath.

“The Nollywood members need to pray seriously in the year 2021. The Nigerian Christians need to come together and pray now if they want any Christian leader to be a president failure to do this will take miracle of the century for any Christian to become Nigeria president.”

“One of the leading Bishops in Nigeria should pray against serious sickness. God is now calling on His people to come back for him to avert His judgment.

“American and European nations have become sinners in the eyes of God. They will be moving from one problem to another. God revealed further that only to those who live holy lives in 2021 will live by the mercy of God and be showered with mercy and protection.”