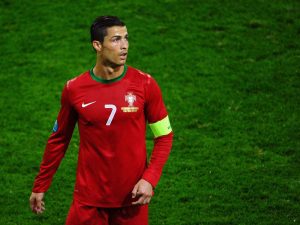 Cristiano Ronaldo has revealed the next record he wants to break in his football career.

The Portuguese professional footballer who plays for Seria A club, Juventus, has been quoted to say that he wanted to break Ali Daei’s record of international goals for a male footballer.

Ronaldo reached the mile following his brace in their 2-0 win over 10-man Sweden in the UEFA Nations League.

Naija News reports that the player whose football salary as at 2019, as revealed by Wikipedia is 31 million EURO, in their last night clash with Sweden netted two spectacular goals from outside the box in each half of the game, given his country another great win in the competition.

Ronaldo who now has 101 goals for Portugal is said to have set his target to beat Daei’s record of 109 goals.

Speaking on an interview after the game, Ronaldo said, “I managed to beat this milestone of 100 goals and now (I’ll go) for the record. It’s step-by-step. I am not obsessed because I believe the records come in a natural way,”

He added, “When I had this problem in my toe, I always knew that I could recover for this second game.”

Meanwhile, French Ligue 1 side, Lyon has confirmed Arsenal’s interest in signing its midfielder, Houssem Aouar during the current transfer window.