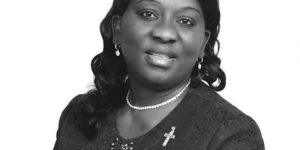 The General Overseer of the Spirit and Life Bible Church (SLFBC), Apostle, Debrah Eunice Osagiede has died on Monday at the age of 62.

Her death was confirmed in a statement by her son, Gordon Osagiede Jr who explained that the cleric passed on after a brief illness.

Naija News understands she was the wife of late Apostle Gordon Erhauyi Osagiede.

Osagiede Jr, in a statement where he announced her passing away said:

‘The Name of the Lord is a strong tower and is mighty.

‘We serve a Good and Gracious God who will never leave us nor forsake us.

‘Beloved what I’m about to share with you won’t be easy to take and I know it is only by the Grace and the Love of God that we shall overcome.

‘As the Word of God tells us to be absent from the body is to be present with the Lord.

‘I am informing you beloved with a pained heart that Our Mummy, the First Lady of Global Evangelism, Daughter of Jesus Christ to the Nation’s has gone to be with her Heavenly FATHER.”

Funeral arrangement will be announced by the family soon.

Earlier, this online news medium reported that Benue State Governor, Samuel Ortom has brokered peace between a Channels TV reporter, Pius Angbo, and his wife who was beaten up by the reporter.