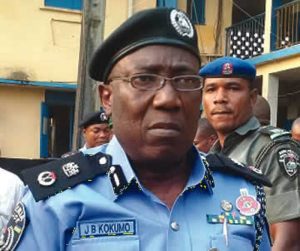 Johnson Kokumo, the Edo State Police Commissioner, has said that policemen will no longer watch criminals kill them without doing anything.

Kokumo, while speaking at the inauguration ceremony of 70 vigilante group in Ikopaba-Okha local government of the State yesterday,  stated that there is a justification to use their firearms when their lives are in danger or while defending others whose lives are being threatened.

Johnson further disclosed that operatives of the force will be on 24 hours joint patrol with other security agencies in the local government.

He said; “We will keep talking to our officers not to police with bitterness. But never again will it happen for someone carrying jack-knife to kill a policeman carrying AK-47.

“The police will no longer fold their hands and die like chicken. I want everyone to take the message home to neighbours and their children.”