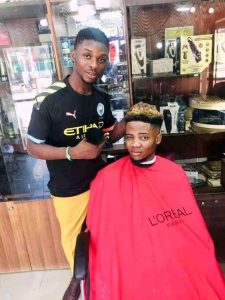 The Kano State Police Command has denied arresting a barber, Elijah Ode, for blasphemy, contrary to media reports on Wednesday.

Speaking to PMNews, Police PRO in Kano, Abdullahi Haruna, said Ode was arrested over alleged rape and not blasphemy.

He accused some people who want to cause trouble for spreading false news that the barber was arrested for alleged blasphemy.

Meanwhile, an official of Hisbah in Kano had also denied Ode’s arrest.

“We don’t have any one like that with us”, the official said.

Hisbah is the Sharia Police and would have been the arresting authority in the first instance, in the case of an accusation of blasphemy.

According to the report made available on social media by a Benue activist, Smith Akoko, the young man was apprehended after two people he had barbed got arrested for having hairstyle which is blasphemous to the Islamic religion.

As confirmed by the young barber’s relative, Sunday Ukenya, Elijah was arraigned in court on Tuesday, February 2 and later remanded.

The barber who resides in Sabon Gari area of Kano is said to have combined his barbing business with studies. However, his business got disrupted during the week after falling in the net of the Islamic religious extremists who accused him of blasphemy.