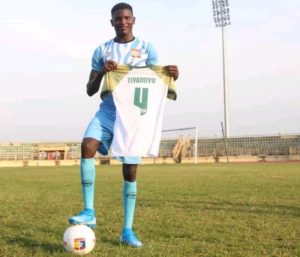 The Assistant Inspector-General of Police in charge of Zone 2, Ahmed Iliyasu, has approved the sacked of one Olaniyi Ogunsoro, an Inspector with the Abeokuta Zonal Intervention Squad of Special Anti-Robbery Squad (SARS).

It was gathered that the policeman was involved in the death of the Sagamu-based Remo Stars football club defender, Kazeem Tiyamiyu, on Saturday.

In a statement by Remo Stars media officer, Oladimeji Oshode, the club’s captain was killed at about noon on Saturday along Sagamu road.

The club spokesperson accused the SARS operative of stopping the vehicle Kazeem was driving alongside his teammate Sanni Abubakar.

According to Oshode, Kazeem was allegedly pushed out of the vehicle by the SARS operative, who had mistaken him for a suspected internet fraudster (Yahoo boy), before he was hit by an oncoming vehicle.

However, the Ogun State Police Command claimed he jumped down from their vehicle, on their way to the police station, and was crushed by a hit-and-run driver.

This online platform reports that the Inspector-General of Police (IGP) Mohammed Adamu, on Monday, ordered an investigation into the death of Tiamiyu Kazeem.

The killing of the football player led to massive protests on Monday in Sagamu, Ogun State.

During a condolence visit to the home of the deceased footballer alongside Governor Dapo Abiodun, the Deputy Inspector General of Police, in-charge of Research and Planning, Peter Ogunyanwo, announced the scrapping of all Police Zonal Intervention Squad (ZIS) satellite offices.

It was learnt that the Ogun State Police Command on Monday tried Ogunsoro and found him guilty of conducts considered to be unprofessional and thereby recommended his dismissal.

The Ogun State Police Spokesman, Abimbola Oyeyemi, had since confirmed the dismissal of the inspector.

This online news platform also gathered that another Assistant Superintendent of Police is being investigated over the matter.