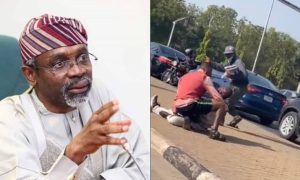 The Federal Capital Territory Police Command has distanced itself from the security operative attached to the Speaker of the House of Representatives, Femi Gbajabiamila, who killed a newspaper vendor on Thursday.

The incident occured in Abuja at the Three Arm Zone on Thursday when the convoy of the speaker was on move.

Gbajabiamila on Friday confirmed the incident and disclosed that the officer has been sacked.

The spokesman of the FCT Command, ASP Mariam Yusuf, in a statement released on Friday disclosed that the security operative is not a police officer.

“Contrary to the misleading information, preliminary investigation into the unfortunate incident reveals that the security aide who shot at the vendor is not a member of the Nigeria Police Force.”

He further stated that the Commissioner of Police in FCT, Bala Ciroma has ordered an investigation into the incident.

Yusuf commiserated with family and friends of the deceased.

He promised that the police will take the investigation serious and make the findings public.