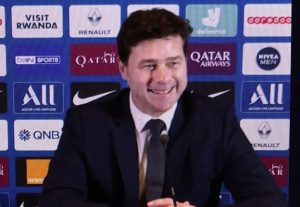 New Paris St Germain coach Mauricio Pochettino has won his first game in a 3-0 win over Brest in the French Ligue 1.

Mauro Icardi added a second, and Pablo Sarabia added a third from the 20th yard.

With that result, one point remains between second-placed PSG behind Lyon who drew 2-2 at home against Rennes.

Pochettino made it 1-1 in his first game in charge of PSG against Saint-Etienne on Wednesday.

The former Tottenham Hotspur manager was appointed as the new manager of PSG to weeks ago.

The Argentine professional football manager sealed a three-year contract that will see him remain at PSG until 2023.

He replaced Thomas Tuchel, who was sacked by the French club on Christmas Eve, four months after steering them to their first Champions League final where they lost to Bayern Munich in Lisbon.