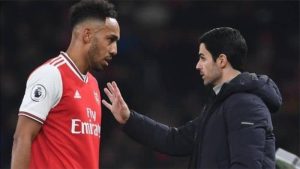 Mikel Arteta wants Arsenal fans to “calm down” over Pierre-Emerick Aubameyang’s contract given that the transfer window has not been completed this season.

Arteta is “confident” that the Arsenal captain will renew his contract.

Aubameyang’s contract expires next summer, prompting speculation that he could leave the club, but last month Arteta said he had persuaded him to stay.

I will hold Aubameyang no matter what – Arteta
Aubameyang is uncertain at Arsenal
“He is very happy to be here,” said Arteta, speaking ahead of Saturday’s clash with Fulham.

“He wants to keep up the pressure and help the team. I think the fans should calm down.”