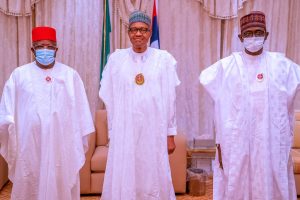 Peter Obi, a former Vice-Presidential candidate of the Peoples Democratic Party (PDP), has downplayed the defection of Governor David Umahi of Ebonyi State to the All Progressives Congress (APC).

Recall that Umahi had dumped the PDP for the APC, citing the opposition party’s unfair treatment to the southeast.

He also denied defecting to the ruling party to contest in the 2023 presidential election.

But speaking in an interview with Arise TV on Tuesday, Peter Obi, a former Anambra State governor, said Umahi’s defection has no economic value to the average Nigerian.

While urging Nigerians not to be distracted by the Ebonyi governor’s defection, Peter Obi wondered how many lives Umahi had economicaly impacted.

He said: “How many people have been pulled out of poverty by Umahi’s defection? Will Nigeria exit recession because Umahi left PDP?

“What economic value does Umahi’s defection to APC have on the average Nigerian on the street who is struggling to put food on their table?

“We must not be distracted by political movements at this time. Anyone is free to belong to any political party. Our common focus should be saving our economy and making our governance fruitful and productive.”