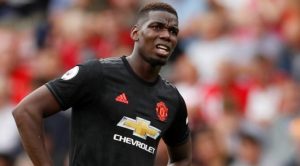 Paul Pogba is likely to miss Manchester United’s first Premier League game of the season against Crystal Palace on September 19.

United boss Ole Gunnar Solskjaer says Pogba has returned to training but is unlikely to feature against Palace.

“He was quick to recover and we hope he will play next weekend. But I’m not 100 per cent sure.”

Pogba missed most of last season’s games with a hamstring injury, although he returned to action when his contract with the club was revoked.