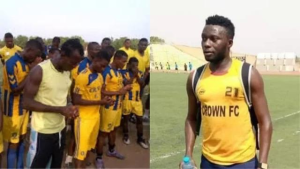 Naija News learnt that the incident happened during a friendly match between the deceased’s club against a club in Abeokuta, Ogun State.

It was reported that the player played in the first half of the match against opponents, Sliema Wanderers during the weekend. However, Yusuf was reportedly resuscitated by medics after he slumped and subsequently died at the Hospital in Ijaye.

Confirming the incident, the Media officer of the Gateway FC (Yusuf’s club), Moses Ojewumi, revealed on Monday in Abeokuta that the late player “didn’t show any signs of illness when he came for trials and didn’t die at the camp as it was erroneously reported in some quarters.”

The former Abia State Governor and a business mogul, who according to Forbes has a net worth of $1.1 billion dollars recently indicated his intentions for the Premier League outfit.