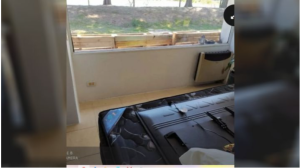 Diego Armando Maradona left the hospital on November 11 after his operation for a subdural hematoma and went to a home in San Andres, in the metropolitan region of Buenos Aires. The Argentine star was transferred there to be monitored and receive medical care at his home but the conditions, according to Clarín, were not the best.

Diego spent his last days in a house that did not have a comfortable room as he needed, according to this Argentine newspaper. On the 10th he was in a multi-story house but, unable to transfer him to the bedrooms on the upper floors, they adapted a room on the lower floor that did not have the best conditions for rest.

This newspaper assures that it had a double bed, a 32-inch television and air conditioning but, on the other hand, it had a chemical bath and not a full toilet for use. It also had a massage chair and they had purchased several blinds to prevent excessive natural light from entering.

Olé cites sources from the judicial investigation that assure that this room was “behind the kitchen” and that “there were permanent noises.” “Why didn’t they rent a house with a bathroom on the ground floor? Maradona had enough money to be in a comfortable place of home confinement. He didn’t deserve something like that,” he says.

The investigations to clarify his death, which are carried out by the San Isidro Attorney General’s Office, continue. The last change at the judicial level was the decision of Judge Orlando Díaz to change the case from ‘investigation and cause of death’ to ‘involuntary homicide’.

According to Rodolfo Baqué, lawyer for one of the nurses who cared for Diego, for several days no one took his blood pressure and there was no clinical doctor who visited him with the recommended assiduity. This ensures that her heart rate was higher than recommended and no one was in charge of monitoring her, thus reaching the ultimate consequences.

“Yesterday speaking with Claudia he told me” Cabezón, if you went in and saw where Diego died, you’ll die, “Ruggeri added about the room in which Diego Armando Maradona rested, making public a statement by Claudia Villafañe, Diego’s ex-wife.