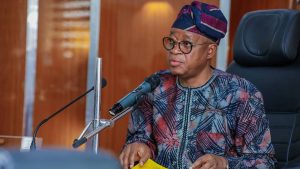 Governor Gboyega Oyetola of Osun State has given looters 72-hour amnesty to return stolen property or face the full wrath of the law.

He gave the ultimatum on Sunday during an on the spot assessment of the extent of damage perpetrated by looters in the state on Saturday.

The Osun governor said those who perpetrated the act have the period of grace to return the looted property to either the palace of monarchs within their domain or the Chairmen of their respective council areas.

Recall that Osun residents on Friday descended on a COVID-19 palliative warehouse located in Ede, carting away various food items and packages.

However, the youths as seen in the videos that have gone viral on the internet, didn’t wait for the government to share the items as they happily looted the items and escaped with as much as they could carry.

Cartoons of Indomie noodles bagged rice and some other food items were carted away by the residents. Other items the invaders made away with include raw food items like beans, noodles, sugar, salt, garri, rice, pastas, and others.

According to one of the people at the scene who spoke to newsmen, they believe the government will not eventually share the palliatives to people but want to keep them till 2023 as campaign materials.