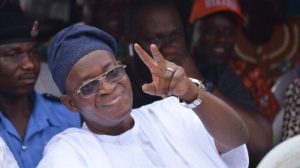 The Governor of Osun State, Gboyega Oyetola has denied knowledge of his second term campaign posters which recently surfaced in major cities in the state.

The Governor in his reaction on Saturday via a statement by his Chief Press Secretary, Ismail Omipidan said he is focused on delivering dividends of democracy to the people of the state at the moment and doesn’t want to be distracted by second-term campaign issues.

He appealed to those behind the posters to relax and wait till the right time for such activities.

He said: “I smell some kind of mischief and ulterior motive, especially as the promoter and patron of one of the media was a former Commissioner in the State. Whatever the motives or intentions are, they are dead on arrival.

“For now, the All Progressives Congress, APC, in the State is more preoccupied with mobilising the people for membership registration and revalidation exercise, while Governor Oyetola is preoccupied with governance and not politicking.

“The Governor appreciates the goodwill and the solidarity of those behind it, if truly they are genuine, but wishes to state that what is uppermost in his mind at the moment is to take Osun to greater heights.

“He, therefore, appeals to those behind it to channel their efforts towards supporting government’s effort at changing the fortune of the State, which would probably make 2022 unattractive to the opposition.”

Meanwhile, Chief Mike Ozekhome (SAN) has described as illegal and unconstitutional the arrest of #OccupyLekki protesters at the Lekki toll plaza including the detention of comedian Debo Adebayo aka Mr Macaroni.

In a message sent to The Punch, the human rights lawyer stated that people were allowed to protest under the military regime.