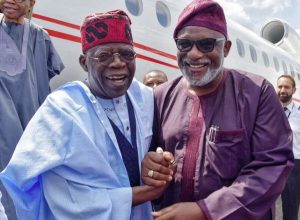 Ondo State Governor and the governorship candidate of the All Progressives Congress in the state, Rotimi Akeredolu, has noted that the outcome of the forthcoming election in state would determine the chances of the South-West in the 2023 presidency.

The APC governorship candidate stated this after he mobilised traditional rulers to meet with the National Leader of APC, Bola Tinubu.

This is coming after he commissioned the Revenue House to mark his second term kick-off.

Although the former Governor of Lagos State is yet to confirm his presidential interest, the APC leader is believed to be eyeing the 2023 presidency.

Akeredolu while speaking on 2023 presidential election in Nigeria noted that the Ondo State election has a major role in the general election.

“The October 10 election in Ondo State is not about Akeredolu but about the future of Ondo State and the entire Yoruba nation because whatever the outcome will be shall determine our seriousness in the quest for the 2023 presidency,” the governor said.