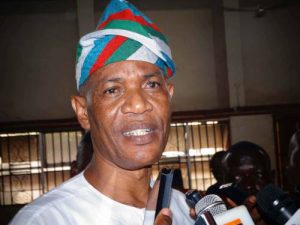 Olarenwaju Kazeem, the Director-General of Chief Olusola Oke Campaign Organisation, has dumped the All Progressives Congress (APC) for the Zenith Labour Party (ZLP).

Naija News reports that Kazeem joined the ZLP at his country home at Ikare Akoko alongside his supporters across the 18 local government areas of Ondo State.

Giving reasons for joining the ZLP, the former DG accussed the ruling party of embarking on anti- people’s policies as well as subjected the masses into abject poverty.

The former APC chieftian said Hon Agboola Ajayi, the Ondo State deputy governor, was the only alternative and solution to the bad and dysfunctional government.

Akeredolu will contest the October 10 governorship election against Agboola of the ZLP and Eyitayo Jegede of the Peoples Democratic Party (PDP).