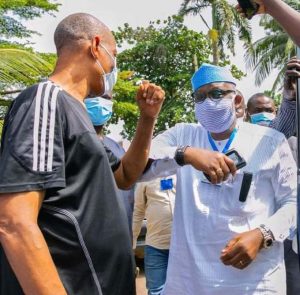 In a bid to reconcile warring parties, Governor Rotimi Akeredolu met with the aggrieved leader of the Unity Group in the All Progressives Congress (APC) led by Chief Olusola Oke.

Naija News reports that Akeredolu had won the APC guber ticket for the October 10 governorship election in Ondo State.

Recall that the Unity group had denied speculations of planning to dump the APC after the primary but with conditions to be met by Akeredolu within seven days.

“We have resolved that we remain members of the APC in Ondo state and our respective wards.

“We agreed that it is not in the interest of any member of the party for the party to slide into the hand of opposition and therefore unless unavoidable.

“We will do everything possible on our part subject to the condition and terms that will be given out to retain the party in power in Ondo State,” Olusola Oke had said.

However, in a meeting held on Tuesday, the group asked Akeredolu to meet some demands as a precondition for their support in the coming election.

It was gathered that the demands include the governor running an all-inclusive government after winning the second term election.

According to Vanguard, the group insisted on a cohesive, united APC where there won’t be a disconnection, where all members will be treated as equal, where government patronages will no longer be sectional and right and privileges of members will be respected without hindrance.

The meeting also discusses how to incorporate the Olusola Oke campaign group and the Unity forum into the campaign team for the election.