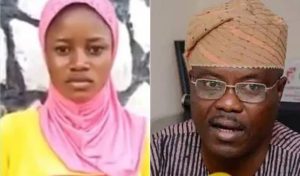 A 16-year-old girl who accused the Commissioner for Environment in Ogun State, Abiodun Abudu-Balogun of sexual harassment, Melojeuekun Barakat Mayowa, seems to have made a u-turn on the case.

This is coming after the teenager in a video stated that there were a misconception and misunderstanding between her and the commissioner.

Naija News had earlier reported that the Ogun State Government suspended the commissioner to enable him to cooperate fully with the investigation.

Mayowa in the short video appreciated everyone who has shown supports on the case. She appealed that the case be allowed to rest.

“I want to use this opportunity to appeal to meaningful Nigerians to please allow this matter to rest.”

Recall that the teenager in an earlier video had accused the Commissioner of enticing her with money, saying he pressed her breasts and caressed her against her consent.

She further stated that the suspended Commissioner recited some incantation as he allegedly tried to place his hand on her head.

But, Abudu-Balogun has debunked the allegations, describing it as mere political blackmail.

The police have since commenced an investigation into the case by inviting Abudu-Balogun to Abigi police station in Ogun Waterside Local Government.