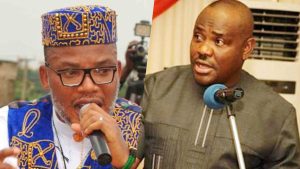 Governor Nyesom Wike of Rivers State has been warned by the leader of the Indigenous People of Biafra, Nnamdi Kanu, that he will end up like Ken Saro-Wiwa.

The IPOB leader stated this while reacting to the plea of the people of Ogoni calling on the Federal Government to halt the ongoing construction of a prison facility and a cemetery on their land.

Kanu noted that Ogoniland is now filled with prison yards and cemeteries due Saro-Wiwa”s mistake of betraying his people.

Recall that the late writer was tried by a special military tribunal during the regime of General Sani Abacha.

Saro-Wiwa was accused of masterminding the killings of Ogoni chiefs at a pro-government meeting.

Recall that Governor Wike accused members of IPOB of killings and destruction of properties in the state under the disguise of End SARS protest.

The development saw the Rivers State Governor sign an executive order declaring IPOB as terrorist organisations in the state.

Kanu in a post on Facebook recalled, “A little over 50 years ago, a young pretender to the throne Wike is aspiring to occupy today, by the name Ken Saro Nwiwa, later named Wiwa, just as Nwike is now Wike instead of Nwike by removing the first letter ‘N’ in his Igbo surname, made the mistake of betraying his own, the people of Biafra.”

IPOB leader stated that Saro-wiwa’s village has been destroyed by pollution from oil exploration.

He further stated that Ogoni has not been free due to the betrayal of Saro-Wiwa.

He said, “Wike, this is the same prize you will pay for your betrayal of Biafra but yours will be worse because the name Wike will no longer exist.”

Kanu warned that this should serve as an important lesson to the people of Ogoni and all those supporting Governor Wike, adding that “You all must know that betrayal of your people never pays.”