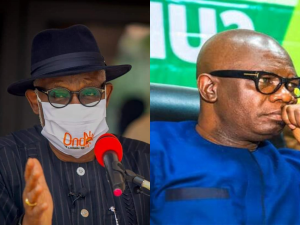 Good Evening, to all readers and lovers of Naija News, the electric atmosphere of the Nigerian Politics keeps many Nigerians attracted to political stories and dramas of many public office holders from God Fathers to political sons and gladiators.

However, here are some of the political quotes that give us a feel of what transpired in Nigeria and around the world in the passing week.

Top 5 Political Quotes In Nigeria For This Week

1. Ize-Iyamu: Move To APC And Your Sins Are Forgiven – Bala Mohammed Attacks Presidency

Recall that Garba Shehu while reacting to the criticism of President Buhari’s endorsement of Osagie Ize-Iyamu, asked the Peoples Democratic Party to sack all its governors under investigation for corruption specifically

2.Ondo: I Have The Support Of APC Aspirants – Akeredolu

The governorship candidate of the All Progressives Congress, Rotimi Akeredolu, has called on the people of Ondo State to avoid fighting over any politician ahead of the governorship election in the state.

The Ondo State Governor called on members of the party to close their ranks as governorship aspirants under the party are in support of his candidature.

3.Obaseki: Go Take A Rest, We Have Audio To Implicate You – Fayose Fires Bode George

Governor Nyesom Wike has stated that the federal government or its appointees cannot convince the people of Rivers State to vote for the APC instead of the PDP.

He made this known on Thursday when receiving the leadership of the PDP led by Amb. Desmond Akawor, who came to present the party’s action plan to him in his office.

The Deputy Governor of Ondo State, Agboola Ajayi has formally announced his defection from the Peoples Democratic Party to the Zenith Labour Party.

Ajayi disclosed this development on Friday at the ZLP Secretariat in Akure, the state capital.

The Ondo State Deputy Governor was welcomed by the party’s leadership and faithful from the 18 Local Government Areas of the state.