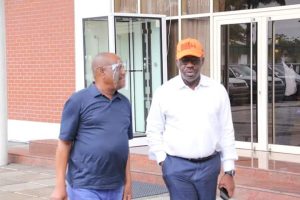 Governor Nyseom Wike of Rivers State has claimed that President Muhammadu Buhari and Vice President Yemi Osinbajo are not backing Osagie Ize-Iyamu, the candidate of the APC in the governorship election in Edo State.

Speaking on Sunday, Wike pointed out that the absence of Buhari and Osinbajo at the APC governorship election flag off was a confirmation that Ize-Iyamu does not have the blessings of the presidency.

“The absence of the President and Vice President at the flag-off of the APC Governorship campaign is a confirmation that he does not have their support,” he said.

Wike, who is the Chairman of the Peoples Democratic Party National Campaign Council for Edo 2020 Governorship Election, said he was shocked by the statement released Tinubu.

“Tinubu is one man that I have great respect for so when I read the papers, I was taken aback. It is unfortunate that members that were not inaugurated can turn around to illegally impeach people,” he said.

“What Governor Obaseki did is what any Chief Security officer should do. It is justifiable in order to avoid chaos.

“The certificate claims about Governor Obaseki by the former APC National Chairman is a non-issue because he is the best candidate for Edo State.

“It is unfortunate that we are in a country that somebody that does not have a certificate will question the one that has.

“His claim that if APC losses the election they will secure the mandate through the courts is a total confirmation that the Party cannot win the Edo election through the ballot box.

“Securing victory through the courts will be null and void as there are still Judges in Nigeria with conscience who cannot dance to the tune of the APC.”