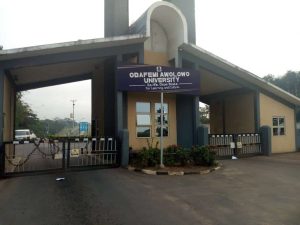 Authorities at the Obafemi Awolowo University, (OAU) Ile Ife have described as false, a circular making rounds on some platforms which purportedly claimed the University is set to resume.

The Public Relations Officer of the University, Abiodun Olarewaju in a statement on Tuesday, clarified that the circular and its content were both fake as the institution had not announced any reopening plans.

It, therefore, urged students, parents, guardians, and other stakeholders to disregard the circular and its content.

The statement by the University titled ‘OAU yet to resume’ noted that OAU as a federal government institution has not received any instruction for the reopening of schools which were shut down in the wake of the COVID-19 pandemic.

It noted that until the government reverses the order shutting down schools, the institution can’t reopen.

“The university management wishes to officially inform our students at all levels, their parents and guardians, that the said circular is fake and malicious both in content and context and it should be disregarded in its entirety.

“Obafemi Awolowo University is a Federal Government-owned institution and the instruction to go on recess in the wake of COVID-19 pandemic, in the month of March 2020, by the Federal Government has not been reversed.

“Accordingly, we want to use this medium to urge our students to remain calm, and await authentic information from the university management as soon as the Federal Government gives the go-ahead to reopen the University,” the statement read in part.