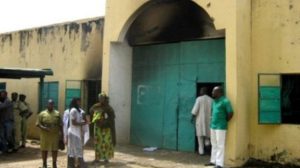 The fire outbreak at the Ikoyi Correctional center has been controlled, according to the service.

The service further stated that was no jailbreak in the facility, but the fire incident affected some part of the centre.

The spokesperson for Nigerian Correctional Service (NCoS) in Lagos, Rotimi Oladokun, noted that there is no cause for alarm.

Oladokun added that a statement will soon be released by the service.

He said: “There was fire on a part of the correctional centre but it has been contained. It did not affect the inmates in any way. There is no jail break and all is fine. We will issue a statement soon.”

There had been report that hoodlums attacked the centre and released inmates from the facility.