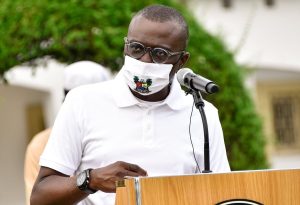 Governor Babajide Sanwo-Olu of Lagos State, has debunked the report that protesters were killed during the shooting at Lekki tollgate.

Recall that security operatives engaged protesters following the declaration of 24 hours curfew in the state.

Gov. Sanwo-Olu while speaking on Thursday noted that no death has been recorded.

He added that he has been to hospitals, mortuary to confirm.

“Fellow Lagosians, as we pray for the swift recovery of the injured, we are comforted that we have not recorded any fatality against widespread circulation on social media.”

”Both myself and the leadership of my ministry of Health have been going round hospitals and mortuarie to see and monitor for ourselves what had happened.”