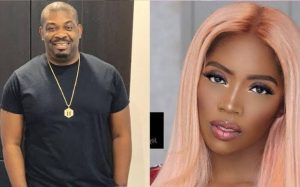 A storm of reactions by Nigerians has greeted the purported invitation of Michael Ajereh, popularly known as Don Jazzy and Tiwa Savage by the Department of State Service (DSS).

Reacting to the development in a short video published on the micro-blogging site, Twitter, Don Jazzy asked what the word “quizzes” was as applied in the report published by SaharaReporters.

Calm down Nigerians.
Whatever Don jazzy and Tiwa savage said must have killed thousands of people in Southern Kaduna. The DSS has the best interest of Nigerians in mind. https://t.co/YKhSQ7I4Kq

Don Jazzy should remind them that he and the Mavins performed Dorobucci at the APC rally in Lagos in 2015. That will make them go easy on him. Especially when they remember how Amaechi danced with his broom https://t.co/xR4P39EGYD

I am happy Donjazzy's happened. He was a strong critic of the GEJ govt and promoter of an unrepentant tyrant. Today, he is forming brand influencer.

Like him sip from Buhari's brutality. There is enough to go round. https://t.co/z2GvYE7zbF

You are rejoicing that Don Jazzy was quizzed by DSS for criticising Buhari because he also criticised GEJ. So u have been angry at him for daring to criticise GEJ? Yet you are the first to line up for his giveaways! Your anger does not extend to his money?#StomachInfrastructure

DSS quizzed Don Jazzy and Tiwa over statements about Buhari?

We owe Jonathan an apology as a Nation.

Wow….
That's how 2Baba has been silenced.
We must not let them silence Don Jazzy and Tiwa Savage! https://t.co/PoTTpQRM2r

Nothing fear this government pass criticism or protest from influential southern Nigerians. Two seconds, Don Jazzy & Tiwa Savage don visit DSS office. Imagine what will happen if all Nigerian celebrities unite and call these idiots out. They will arrest the entire industry.