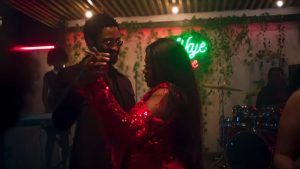 Award-winning singer, Aituaje Iruobe, popularly known as Waje has finally quenched the speculation that she is planning to tie the knot with talented Nigerian singer, Ric Hassani after their picture was spotted on the internet showing the artists in lovey-dovey picture.

The 40-year-old single mother had posted a picture on her Instagram account showing all happy and smiling, while Hassani was spotted placing his head on her laps.

The development saw Waje’s best-friend, Omawumi, who happens to be a talented singer in the Nigerian music industry react and stir speculation that Waje and Ric Hassani will soon be approaching the altar to tie the knot.

Many other top personalities in the entertainment industry like, Juliet Ibrahim, Toyin Abraham, Mercy Johnson-Okojie, Toke Makinwa and many others also reacted to the development.

Nigerians who reacted believed that the mother of one might want to give a chance again, while some others quenched the speculation, believing that the talented singer is planning to release a new song.

Finally, the waiting time is over, with NaijaMusic.com.ng disclosing that the singer and songwriter, Waje has released an official video for her new single titled “Best Thing” starring Ric Hassani.

The single mother in her new release which had Ric Hassani in the video as her lover promised that she would love to be a soldier and fight for her man.

Waje in the bright video which was directed by Blessing Uzzi was seen presenting gifts like, PS5, a nice Mercedes jeep to her lover.

Waje’s journey to music started a long time ago, she attracted the attention of Nigerians after she was featured in the remix of the defunct P-Square’s “Omoge Mi”.

Waje’s consistency in the music industry also got her another feature in 2018 on the banging hit track dubbed “Do Me”.

She has worked many other songs like Banky W’s “Thief My Kele” and M.I’s “One Naira”. Waje over the years has released two albums titled, W.A.J.E in 2013 and Red Velvet in 2018.