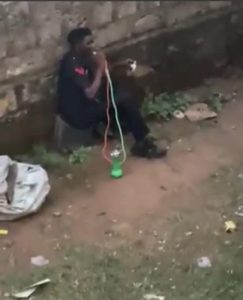 A middle-aged man, in the Nigerian Poice Uniform, has been caught on camera, heavily smoking shisha in an undisclosed location.

Eyewitnesses who captured the embarrassing event on camera could be heard mocking the man in what sound like slangs in pidgin English, saying “E no sabi smoke sef, E go kill himself o…”

However, In another development ,The officers of the Nigerian Police  has filed “malicious charges” against a UK-based Nigerian entrepreneur Bankole Ogunnowo in an attempt to extradite him from the country.

Mr Ogunnowo, who married his ex-wife, Eileen Odumosu, at the Ikeja Marriage Registry in February 2012 explained how altercations between them led to several court cases in the UK.Unable to obtain a favourable court judgement in the UK, Ms Odumosu made complaints against Mr Ogunnowo to the Nigerian police.

,Ogunnowo 41, said he suffered extortion in the hands of the Nigerian police on marital issues between him and his British ex-wife.

Ms Odumosu is a British of Nigerian extraction and a filmmaker based in the UK.