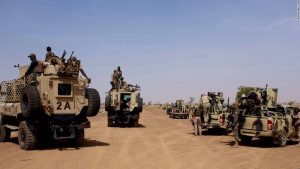 The Nigerian Military has executed a successful airstrike on Sambisa forest in Borno State which resulted in the death of several terrorists.

This development was confirmed in a statement on Tuesday, 29th December 2020 by the Coordinator Defence Media Operations, Major General John Enenche.

According to the military spokesperson, the operation took place on Monday, 28th December and was conducted by the Air Task Force of Operation LAFIYA DOLE.

He added that intelligence reports available to the military has it that some of the terrorists who attacked Borno and Adamawa State recently were part of those killed by the airstrike.

The full statement reads: “Air interdiction missions being conducted by the Air Task Force of Operation LAFIYA DOLE have continued to deal decisive blows on terrorist elements in the North East of the Country.”

“The latest of these was achieved yesterday, 28 December 2020, at the ‘S’ Region in the heart of the Sambisa Forest in Borno State.”

“The air strike, which was executed employing a force package of Nigerian Air Force (NAF) fighter jets, was carried out after series of Intelligence, Surveillance and Reconnaissance (ISR) missions revealed that the terrorists responsible for recent attacks in the Southern part of Borno and Northern part of Adamawa State had originated from the location.”

“Accordingly, the NAF attack aircraft engaged the target area in successive passes, leading to the destruction of some of their structures and logistics stores, including a suspected anti-aircraft gun station as the terrorists fired at the NAF aircraft. Several insurgents were also neutralized in the process.”

Meanwhile, this online news medium earlier reported that a series of deadly attacks by Boko Haram terrorists in three villages in Borno State, which left more than 10 people dead, including four security personnel has forced the state governor, Babagana Zulum to suspend his trip to Abuja so as to visit the affected towns.

As a result, hundreds of people from the villages of Shindifu, Kirbutu, Debiro, Shaffa, Tashan Alade and Azare in Hawul Local Government Area of ​​Borno State had to flee into the forest, only to return to their villages after the dust had settled on Saturday evening.

Volunteers in the area said the attackers came in six vehicles during the raids in Shaffa, Azare and Tashan Alade villages, and set fire to houses and government buildings in the villages with rocket-propelled grenades.