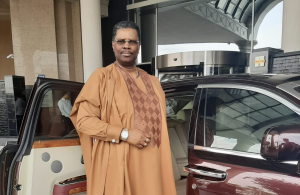 Family sources confirmed the business mogul died at an isolation center in Lagos State. He was aged 64.

Akin-Olugbade, though a lawyer by training is a successful businessman with interests in property development, construction, manufacturing, logistics, distribution, maritime and offshore services, and investment banking.

Born April 2, 1956, to the family of late Babatunde Akin-Olugbade, he held the traditional title of the aare ona- kankanfo of Owu kingdom until his demise on Wednesday.

He was famous for his love for Rolls Royce cars.

Back in 2018, he told ThisDay during an interview that: “I have different concepts of how I spend money.

“I spend money on cars because I have always loved cars. I bought my first Rolls Royce in 1984 and now, I am on my ninth Rolls Royce. I believe in dressing well and I travel a lot.”

The cleric was killed at Edjeba area of Warri South Local Government Area on Tuesday.

A source which spoke on the incident disclosed that the cleric was hit by a bullet during an operation by the gang at a shopping complex in a neighbourhood where he was.

Orumor was confirmed dead at a government hospital where he was rushed to.