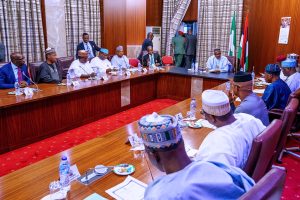 The Nigerian Governor’s Forum (NGF) is set to meet with President Muhammadu Buhari over the rising cases of insecurity rocking the country.

This was made known in a communiqué signed by Kayode Fayemi, the NGF Chairman and Governor of Ekiti State.

Naija News reports that the communique was released to newsmen after the governors’ 22nd teleconference meeting on Friday in Abuja.

The communique explained that Buhari would particularly speak in the light of the attack on rice farmers in Borno State.

The NGF agreed to: “direct State Attorneys-General to review the Water Resources Bill and send their input to the NGF secretariat as quickly as possible and to support the planned “COVID-19 Testing Week’ to be launched by the Presidential Task Force.”

Nigeria has been rocked with various security crises with the latest being the killing of over 43 rice farmers in Borno by members of the Boko Haram sect which drew widespread condemnation both locally and internationally.