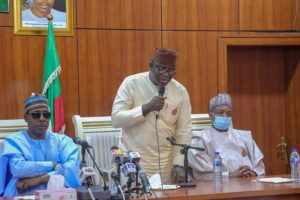 Kayode Fayemi, chairman of the Association of Nigerian Governors and Governor of Ekiti State has said that the country’s military alone cannot win the war against Boko Haram.

Naija News reports that the governor was speaking as his delegation went to offer condolences to Borno State Governor Babagana Zulum following the killing of nearly 100 farmers by Boko Haram on Saturday.

He added that governors could not address the security challenges facing some parts of their states, such as piracy, kidnappings and terrorism.

“The reality we can all say, and I personally as security scholar, the reality I can see is that our military is overwhelmed. Our military is no longer in a position to single-handedly tackle this menace effectively” he said.

“It is not a criticism of our military if one were to suggest a coalition beyond that will even include our neighbouring countries, who are probably more experienced in fighting an asymmetrical war. It will not be a loss of our pride as a country”

Governor Nasir El-Rufai also said the governors’ hands were tied over security in their states.