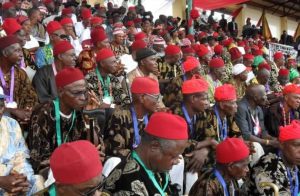 By my educated guess, it will take four decades to put Nigeria together after the exit of President Muhammadu Buhari. Nigeria is like humpty-dumpty – broken, amputated and cannibalised. The Buhari administration has wrought irreparable damage on the country across sectors. The mess is deep and stinks. The next president of Nigeria in 2023 will have to be a night soil man, – in our parlance, a shit parker, agbepo, onye obulunsi.

All government institutions have caved in under the fatal incompetence of the Buhari administration. In fact, every sector with a semblance of life before the erosive coming of the ‘’recession team’’ has been wizened by the tainted touch – a reverse Midas touch — of the current administration. To be clear, it appears there is nothing left to salvage.

As a matter of fact, the debilitation of institutions by the Buhari administration was deliberate. The government wanted to rule unchecked and unfettered. It is the reason it menaced the judiciary by dispatching DSS operatives to break down doors of judges like armed robbers in the dead of night, hounding and arresting judges in 2016. The government even took its paranoia beyond the stratosphere, removing the Chief Justice of Nigeria who is from the South and installing another from the North. By dint of that, it effectively wolfed the judiciary.

The government also succeeded in appropriating the National Assembly. The National Assembly essentially became the minion of the executive – cowering, genuflecting and catching cold anytime the first arm of government sneezes. It is the reason I disagree that the legislature is the symbol of democracy as popularly believed. The symbol of democracy is the critical and vocal masses – the free people. The legislature can wed the executive as we have seen in the case of Ahmad Lawan/Femi Gbajabiamila’s National Assembly and the Buhari administration.

Perhaps the most affected victim of the Buhari administration’s Sadim Touch is the security institution. Lack of cohesion and disharmony is diseasing the military and paramilitary organisations. Owing to the president’s refusal to give the spent service chiefs, who have overstayed beyond retirement, the boot, the promotion of some officers has been stunted. There is rancour and bitterness in the military; this explains why the war against insurgency and banditry is not making any progress. The government infected the military, which was known to be apolitical and professional, with politics and nepotism.

In fact, the Buhari administration has infected every institution of government with nepotism. Again, it will take decades to inoculate these agencies against the virus. Really, it is not that there was no nepotism in the national life before Buhari’s government, but the current administration made it a state policy.

Insecurity is now a quotidian experience, and abnormal normality. It is nearly six years in the life of this administration but there is nothing to celebrate. Nigerians cannot travel on the roads for fear of bandits; they are not even safe in their own homes. Insecurity has devoured the country. No one is spared. Citizens cannot afford basic necessities and the economy is in tatters. But what is worse, there is no hope of respite from these plagues.

‘’In the name of all that binds us as a country, we must begin now to work for a “red cap with an isi-agu” in Aso villa in 2023. Nigeria is for all of us, and we must work towards a society where justice breathes in the busy streets of Aba; where it hovers across the brown roofs of Ibadan, and where it strolls on the fine sands of Sokoto.’’

As noble as this stance is, I believe Ndi Igbo need to really consider the perilous corollaries of their quest for presidency in 2023. If the intention is just to have an Igbo president so as to fulfil a psychological longing, I think we need to probe our objectives. As it is, I doubt if any president that comes after Buhari in 2023 will do much. He/she will spend four or eight years cleaning up after Buhari. It is the reason I see the 2023 presidency as an entrapment.

Conversely, we could forge alliances with progressive groups with the primary aim of achieving restructuring or devolution of power to states ahead of 2023. That is, we support any candidate from any section of the country who has indemnifiable commitment to restructuring. We extract that commitment. The reason for my argument is a president of Igbo extraction pushing for restructuring will be resisted by the North. In fact, it is a campaign fail if any candidate from the South-east preaches restructuring. The nagging fear and suspicion that the Igbo will secede from the country if they get to power is intense.

So, what do we hope to benefit from Igbo presidency if we cannot have restructuring?

Nwabufo is a writer and journalist.