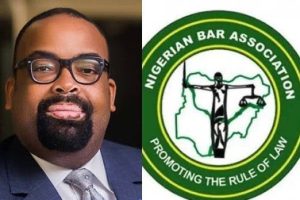 Mr. Olumide Akpata, the President of the Nigerian Bar Association (NBA), has condemned the federal government for clamping down on youths who allegedly promoted the #EndSARS protest.

In a post on Facebook, Akpata described as unfortunate the hounding of #EndSARS promoters by the Muhammadu Buhari-led government.

The NBA President wrote, “With all that’s going on in the aftermath of the #ENDSARS protests, Lawyers are definitely not smiling! @djswitch_ has gone into hiding after receiving threatening phone calls, Moe Odele’s passport was seized and she has been prevented from travelling outside the country and Rinu Oduala and many others have had their accounts frozen by the CBN…this was not the deal.”

Naija News reports that the Central Bank of Nigeria (CBN) had requested the freezing of accounts of 19 Nigerians and a public affairs company linked to the End SARS protests.

This online news platform had reported earlier that the CBN request was granted by a Federal High Court in Abuja, Nigeria’s capital. The request which was filed before the court on October 20 was granted by Justice Ahmed Mohammed.

According to reports, some Nigerian banks were directed to freeze all transactions on the 20 accounts on the list annexed to the CBN’s application as Exhibit A and all other bank accounts of the defendants/respondents for a period of 180 days pending the outcome of the investigation and inquiry currently being conducted by the Central Bank of Nigeria.