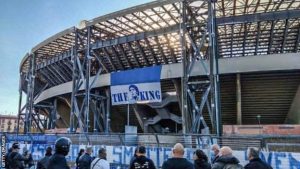 Napoli has changed the name of their stadium to the name of former superstar Diego Maradona.

Former midfielder and coach Maradona died at the age of 60 in November.

Napoli’s Stadio San Paolo will now be called the Stadio Diego Armando Maradona after the Napoli authorities approved the move.

Napoli president Aurelio de Laurentiis made the request to change the name of the stadium in an open letter following Maradona’s death.

And the mayor of Naples, Luigi de Magistris, approved the measure.

Maradona spent seven years at Napoli after arriving from Barcelona in 1984, in 1987 he won the Coppa Italia and the 1989 Uefa Cup.