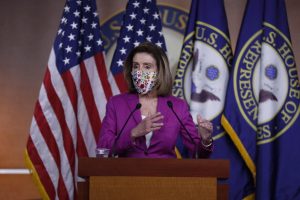 The Speaker of the House of Representatives has called on Mike Pence to invoke the 25th Amendment to declare the president “unfit” to govern.

Nancy Pelosi said Thursday that removing Donald Trump from power was an “emergency of the utmost importance”, accusing him and his supporters of participating in an “attempted coup “.

Impeaching Trump is an “emergency of the utmost importance” because he is a “very dangerous” man, says the Speaker of the House of Representatives.

Because he's a "very dangerous person," @realDonaldTrump should not stay in office, declares @SpeakerPelosi.

Pelosi urged Vice President Mike Pence to invoke “immediately the 25th Amendment to the Constitution to declare Donald Trump” unfit “to govern, saying she hopes to have his answer today “.

If he does not act, Congress “may be ready to move towards impeachment proceedings,” she added.

Meanwhile, FBI chief warns his agency will find those who broke into the Capitol yesterday in Washington and “hold them accountable.”

"We do not tolerate violent agitators and extremists who use the guise of First Amendment-protected activity to incite violence and wreak havoc … We will hold accountable those who participated in yesterday’s siege of the Capitol." pic.twitter.com/OHfQq7VNjG