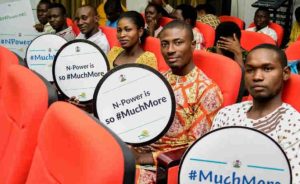 The federal government of Nigeria has revealed that it is working on re-packaging and amending the N-Power scheme to make the scheme better.

The Minister of Labour and Employment, Chris Ngige made the disclosure over the weekend when he visited N-POWER trainees at Anamco And Tetralog Mechatronics companies in Enugu.

The Minister was quick to rubbish rumours that the government was set to abandon the scheme and throw out the beneficiaries.

He, however, admitted that certain changes might occur in the programme due to the planned amendments.

Addressing the N-Power trainees at the manufacturing companies, Ngige urged them to form cooperatives which will enable them access loans from Federal Government agencies such as the National Directorate of Employment, Industrial Training Fund and Bank of Industry even after graduating from the scheme.

He also gave assurances that the federal government will not abandon the N-Power Programme which is an integral part of its Social Investment Programmes.

Meanwhile, Naija News understands batch A beneficiaries of the N-Power scheme have been expressing worries over fears of not getting paid their January stipends.

It will be recalled that earlier reports had it that provision was not made for the 2016 beneficiaries and other affected categories in the 2020 national budget as they were expected to have exited the scheme after two years.

Please I heard batch A, is not included in 2020 budget, therefore will not be paid January stipend according to leadership newspaper, please is this information correct?

Iam 2017 Ntax volunteer, I still go to my place of assignment(F.I.R.S Asokoro branch, FCT)
Only that, I don't have hope what happen next, the contract has expired, no hope whether stipend will come this January
I still going because I want develop myself&also to scare boredom