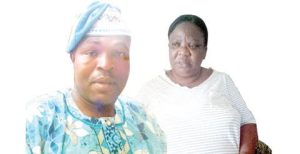 Mrs Olusola Jejelowo is the wife of the Ekiti director, Mr. David Jejelowo, who was shot dead by assailants in his living room in Ado Ekiti. In this interview with ABIODUN NEJO, she recalls the ordeals her husband went through in life as she calls for justice

What kind of person was your husband?

He was Prince David Jejelowo. He was from Eda Ile in the Ekiti East Local Government Area. We got married around 1994. We have three boys. He was a lover of peace. He was never a politician or a businessman. He was a good father.

He was very affectionate and I never saw him fight anyone. Even if anybody picked a quarrel with him, he would ignore the person and even sue for peace.

How did the incident happen?

The incident happened between 9pm and 10pm on Sunday, September 13, 2020, while we were watching the Newsline programme on the Nigerian Television Authority in the sitting room here. We had the window blinds closed. It was when the network news was about concluding that I noticed vibration on the window and not knowing that the person was tearing the net to enable him draw the blinds so that he could see us.

The moment I noticed that, I said, ‘Daddy, look at…’ and he was saying ‘Who is that? Who are you?’ So, the person replied with a gunshot and I ran. The person aimed at me. The bullets hit the wall at the entrance. Daddy was still wondering. The gunshots went on repeatedly and daddy was pinned to the corner. It was even this morning (Thursday) that we washed the blood stains. It was the Catholic Bishop of Ekiti Diocese, Felix Ajakaiye, who advised us when he came yesterday that we should clean the blood. We left the blood there for everybody to see. Our gate was locked that night and daddy even went to inspect it. The children usually locked the gate, and before retiring to the bedroom, daddy would go round the compound to make sure that everything was intact. That had been done before the incident. I didn’t see the assailant; the only thing I saw was a dark image

Did you get help when you called for it?

When we called for help, nobody came out. My children had taken their father down to the hospital before I started seeing people coming around.

What of the police?

After depositing his corpse in the morgue, the people, who came to me and later drove to the hospital to join my children, went to the Odo Ado Police Division on their way back from the hospital. They said they wrote a statement. We did not see any policeman, even on Monday and Tuesday. It was yesterday (Wednesday) after the bishop’s visit that three policemen came. When the bishop came, we were able to recover some bullets. He said he would go by himself to the police station. So, when the policemen came, they greeted me and said they were sent to the house to be with me. When they were leaving in the evening, they greeted me that another set would come, but I have not seen any other set of policemen.

When the sympathisers went to the Odo Ado Police Division, they reported the incident, but no policeman followed them to this place that night. We didn’t see any patrol team; there was no security of any kind except people in our environment.

Since that Sunday night, how has life been without your husband?

Life has been miserable. It is like I should follow him. I am even regretting it. Had it been I knew that he would not run, we would have stayed together so that we would have been cleared off together. Because I don’t know the type of country I am in a country where there is no justice. You cannot cry for help. A country where somebody can just come, kill and go. Last year, my husband was kidnapped for four days. It was the intervention of the whole of Ekiti State that saved him from almost being killed. If not for the intervention of people that God sent to us, he would have been killed then in the wilderness.

But the death came right in his sitting room. He was killed in the house here like a beast for an offence we do not know when he committed. And I am very sure he didn’t commit any offence. He never had any quarrel with anyone. The only thing I know is that he was a very generous man. If any vulnerable person came here to seek help, he would come to their rescue, whether it was material or financial assistance. He was never an oppressor of any kind. We are devout Christians of the Christ Apostolic Church denomination; we hardly miss church programmes.

He was kidnapped for four days?

Yes. Between January 7 and January 10, 2019, he was kidnapped at Ago Aduloju while coming from his former office at the Gbonyin Local Government Council, where he worked as Director of Administration. He was on his way home. We were even planning to go for the New Year prayer in the church. He directed that I should go and that he would join me. On getting to the church, I called his phone and there was no response.

How was the experience in the four days?

The experience was tedious for me. In fact, I have had it so tough; it is so unfortunate. He was released after payment of ransom. They were calling us from the bush that he would be killed, that we should pay N10m ransom. We paid close to N3m. People contributed to it. We begged and sold what we could. It was the whole state that assisted us, because we are civil servants; we don’t have any business; we don’t have investments. They said he would be released immediately; we brought the N10m; we could not raise up to N3m until the fourth day; he was about to be killed then if not for the intervention of God and people in the state.

Were you able to get to the root of the kidnap?

After his release, we couldn’t determine where the thing came from, but people said it was a mere coincidence. I interrogated him whether there was any Yoruba man among the kidnappers, but he said all those who kidnapped him were Bororo. He said the kidnappers spoke Fulfulde throughout the four days he was in captivity. He contemplated resigning from his work, but people said it was not up to that and that it was a mere coincidence. Ordinarily, the belief was that nobody could be after his life. They impressed on him to continue with his work following which he sought transfer which brought him to the Local Government Service Commission in Ado Ekiti. He was there till when he was finally murdered.

It was gathered that his car was once stolen. Is this true?

Yes, that was in 2005. Before then, we were at Ise Ekiti; after we built this house, we moved to Ado Ekiti in 2004. It was the exact day that we clocked a year in this house. He bought a Mercedes Benz 200 and brought it home from the dealer’s shop on Friday; on Sunday, we took it to church, came home and in the evening, he wanted to go and show it to some well-wishers. But while coming back home around 7pm, when he got to the Mobil roundabout, the vehicle was snatched from him at gunpoint. That was October 31, 2005.

If we put all these together, don’t you think some people were after his life?

I do not know. All his friends are people in the church and at the workplace. He was not into anything shady, because he was a very honest person.

Didn’t you have any premonition that danger lurking around the corner?

No. He usually went to work alone. Although he received phone calls, which was the usual thing, at times I would say ‘daddy, you receive too much calls’, but he would say ‘You are a teacher while I am a local government employee; my workplace is like a family place, you cannot compare your phone calls with my own’. He would just joke about it like that.

But did you sense if he was being threatened on the phone?

There was none. If he had received any threatening call, he would have told me. So, there was nothing like that.

What were his unfulfilled ambitions?

There were many. His ambition was to train his children to where they would be self-reliant. He used to say that he suffered, having lost his father at the age of 17, and at that age, he was able to get the primary school leaving certificate. He was at home for five years before he had the opportunity to train himself to secondary school. He used to say that if not for the background and that he lost his father at a tender age, that he would have been a professor by now; he was very brilliant. He then said that because of that, he would spare no expenses to train his children to any level, which he was doing. In fact, I know that wherever he might be now, he would be crying for the children.

What will you miss about him?

For me, he was a father, a mentor, my confidant and my friend. After God, he was next. In fact, I have never had any cause to regret marrying him. I tell my peers and family that if I come to this world 12 times, if it is possible, he would always be my husband. He could do menial jobs to ensure we had food. He made feeding a priority. When in bed together at night, I slept like a baby because he would cover you when it is cold.

How have your children been coping?

They have been crying profusely. I have been trying to calm them; I put them in the hands of God. I don’t know why nature could have allowed this kind of situation to befall us in this house. I don’t have friends, daddy did not even create an avenue for that. I knew him at the age of 20. We were in school together. He never created that avenue for me to think of another person.

What do you want done about the killing?

I want God to do justice, because there is no justice in Nigeria now. I believe that the Lord that he served would do justice. God will expose the person(s) behind this. I want justice. I want justice from God and man. Let the person(s) responsible for this be exposed so that he/she/they can confess and tell the world what daddy did which was why he was so tormented to that extent. He was a CAC member, a lover of Apostle Joseph Ayo Babalola. He loved God till his death.    ,,