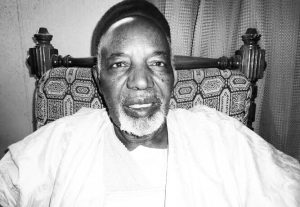 Sagir, son of the former Governor of Kaduna State, Balarabe Musa, has disclosed that his father never spent public funds on the family.

According to him, his 84-year-old late father was reluctant to move the family to Government House.

He said, “I think being the state governor would be different but I knew it would be tough because of what he wanted to achieve and his passion for the weak, the poor and the downtrodden.”

Sagir further stated that the impeachment of his father as governor did not affect him because he was questioned by people he was able to defend what he stood for.

The elder statesman’s son added that the development made him stronger and more popular among the masses.

He noted that Balarabe used the influence he had to fight for dignity of human being and good governance.

“As for us the family, his being a governor made no difference to us except that we moved from our private house to a bigger Government House. But Government House was not feeding us; our father was feeding us from his salary.”

“He didn’t even want to move from our house but they said the house is accessible by two roads and is porous. For security reasons we had to move. So we moved to one of the Government Guest Houses in Alimi Road”, he said.