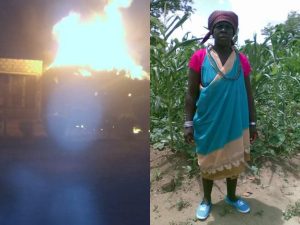 A man has been killed by residents of his community in Ngove village, in the Giyani area of Limpopo for allegedly responsible for the demise of his wife.

Naija News understands that the South African man who is in his early 60s was set ablaze by the villagers in the later hour of Wednesday, October 28. It was reported that the mob had gone on a rampage after remains of 60-year-old Phosa Egnes Maswanganyi, who went missing on Tuesday, October 27, was found hanged on a tree in a nearby bush.

Giving details on the incident, Police spokesperson Col Moatshe Ngoepe, said; “The residents then accused the deceased’s husband and his friend of being involved in her disappearance and eath. Subsequent to that, they torched the husband’s two rondavel houses and thereafter set him alight,”

According to Ngoepe, the deceased’s husband was badly brutalized by the angry mob but that he had been taken to a hospital for medical treatment.

The SP added, “The Giyani police together with the public order police [Pops] unit responded quickly to the scene. The crowd had already left and moved to the other house which they tried to burn too. The police responded swiftly and managed to stop them.”

On his part, while reacting to the incident, Provincial police commissioner Lt-Gen Nneke Ledwaba condemned the unlawful attack on the man. According to him, the police can no longer tolerate citizens taken laws into their hands.

He said, “We cannot allow this kind of behaviour to rule our province where people still ignore our call to work with us and refrain from taking the law into their own hands. The suspects must be hunted down and brought to book.”

Meanwhile, a Ugandan man whose wedding introduction was reportedly scheduled for October 31 has slumped and died, Naija News reports.